This page shows how to set up an Arduino microcontroller board, using an LED module as an example. These components, along with many others, are available in the Barobo Arduino-Compatible Basic Kit and the Arduino-Compatible Starter Kit (classroom bundles available). You will also need a computer (Windows, Mac, or Chromebook machine) to connect to the Arduino board using the USB cable that comes in the kits.

2. Connecting an RGB LED Module to the Arduino 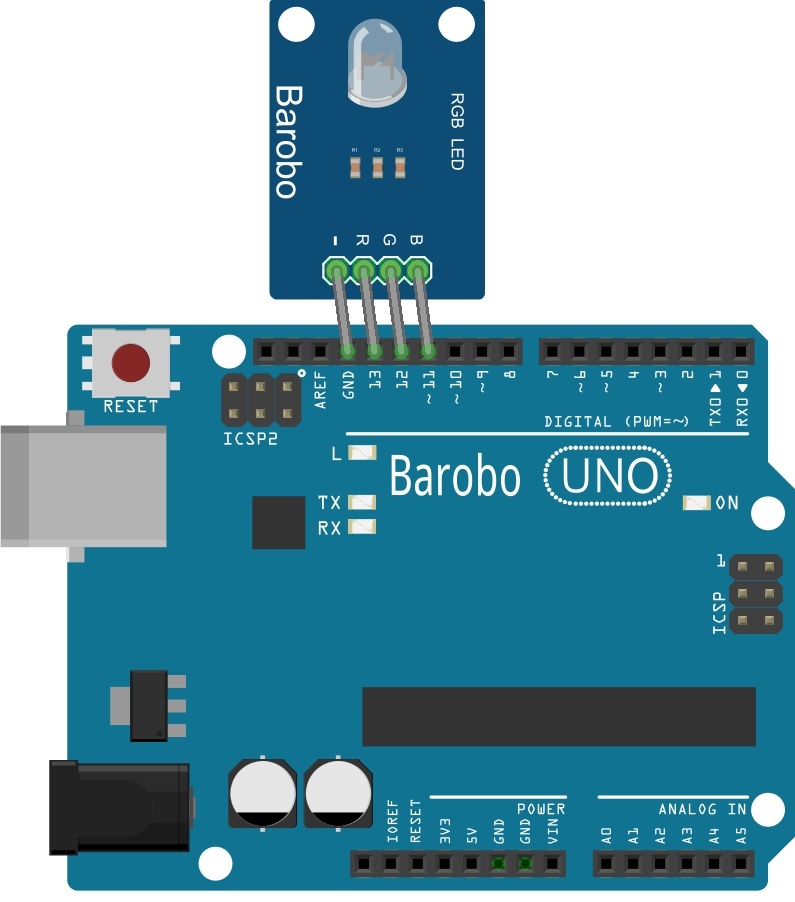 Figure 1: Connecting the RGB LED Module to the Arduino

One side of the Arduino board has a row of sockets labeled 0 through 13 and GND. (Sometimes on diagrams these are labeled D0 through D13, the “D” standing for digital. In addition, even though they are sockets, they are usually referred to as pins.) Plug in the LED module so that its “-“ pin goes in the GND socket, and the R, G, and B pins naturally go in to the 13, 12, and 11 sockets, respectively, as shown in Figure 1.

3. Installing Software to Control the Arduino from a Computer

(a) Downloading and Installing ChDuino for Windows and MacOS

For Windows and MacOS machines, the necessary "ChDuino" software comes as part of the free "Linkbot Labs" software. Information to download and install Linkbot Labs is available here. The “Ch” indicates that the software uses the Ch programming language to control the Arduino. But we can also use RoboBlocky's Arduino code blocks to control it.

After you have downloaded and installed the Linkbot Labs software, you can access the ChDuino software using the Launch menu in RobBlocky (Figure 2): 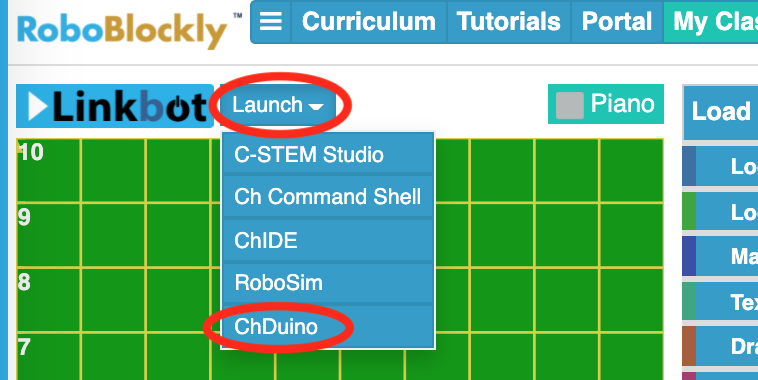 Alternatively, ChDuino should appear in the list of applications for your computer and can be launched from there. Its icon looks like this:

When you open ChDuino, you should see a graphical user interface like that shown in Figure 4. It gives a visual representation of the various pins on the Arduino board, and allows us to control the input and output pins on the board using the interface. You can view the analog voltage values read by the A0-A5 ports on the left side, can view digital input values, and can control the digital output values. For the next step, continue with Section 4 below. 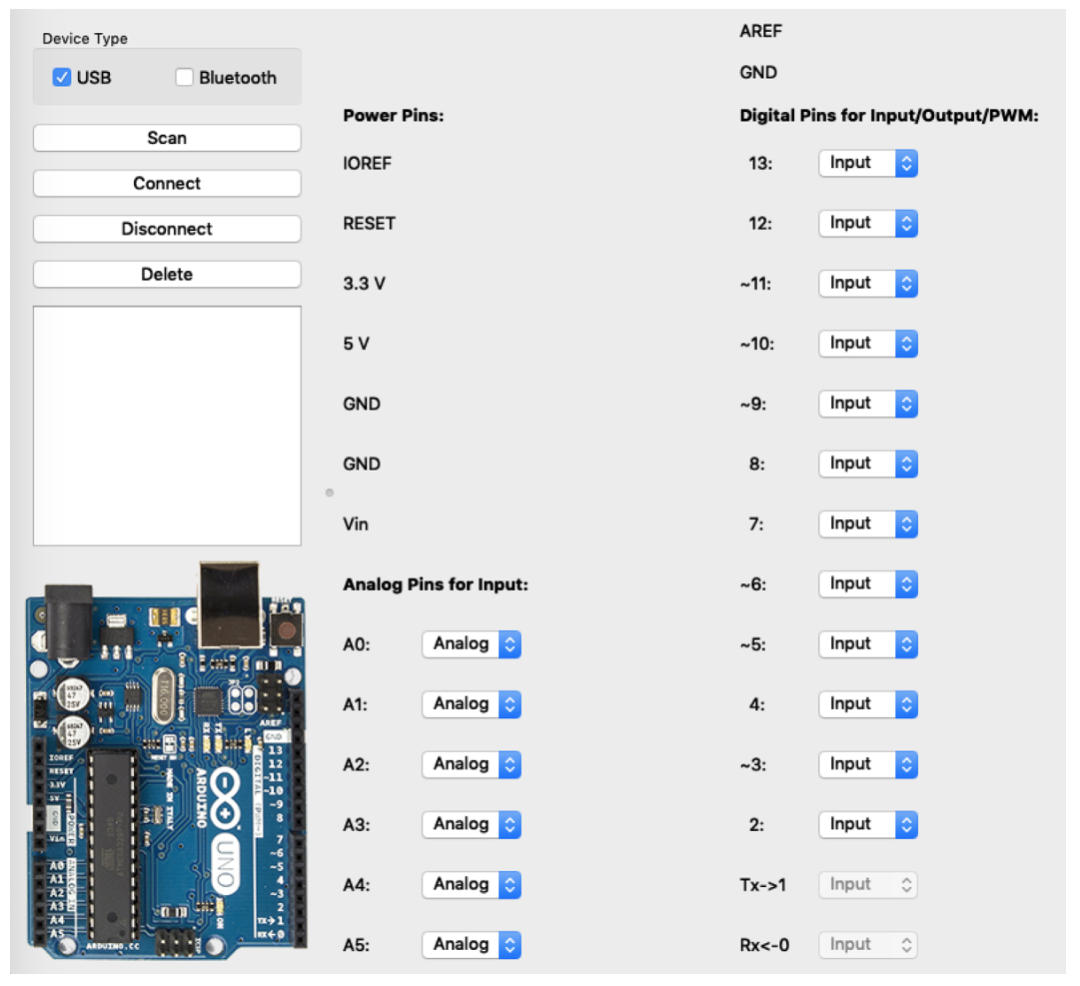 (b) Downloading and Installing Arduino Controller for Chromebooks 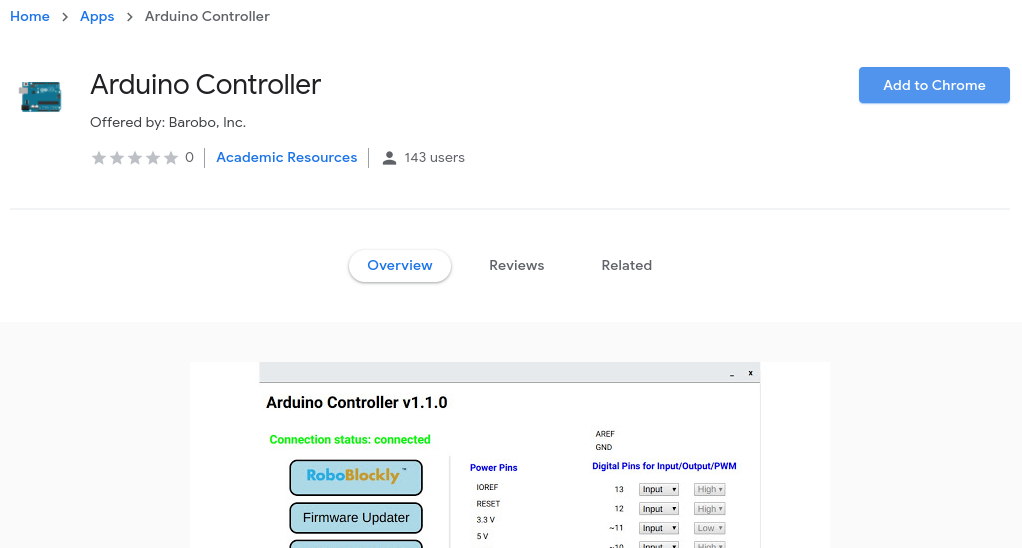 Figure 5: The Arduino Controller Page at the Chrome Web Store (for Chromebook users)

Click the “Add to Chrome” button on the right, and then click the “Add app” button in the popup confirmation window that appears. (If you don’t see the “Add to Chrome” button, but instead it is labeled “Launch app,” it means that you already have Arduino Controller installed as one of your Chrome extensions. Or if it is labeled "Not Compatible," it means that you are not using a Chromebook to access that page.)

After a few seconds the Arduino Controller page will reappear with the “Add to Chrome” button changed to “Launch app.” Click the “Launch app” button. There will be a brief “Loading” message, and then you should see the window shown in Figure 6 below. 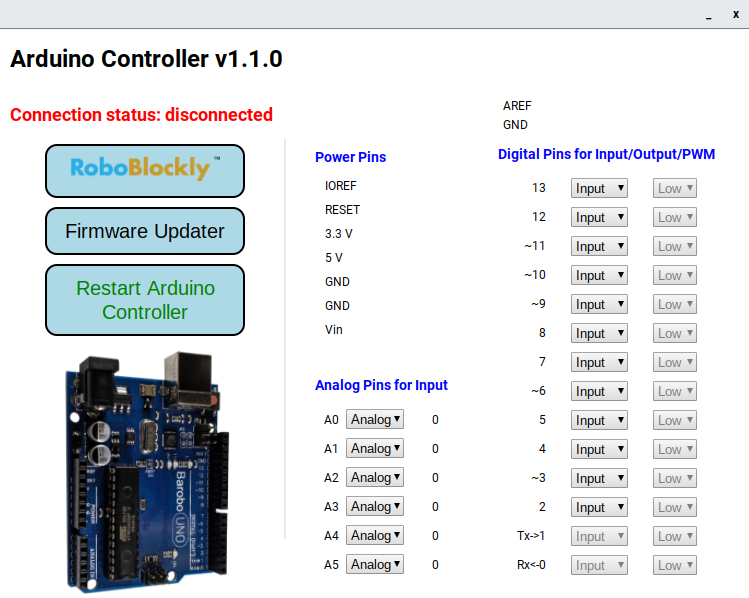 The Arduino Controller window gives a visual representation of the various pins on the Arduino board, and allows us to control the input and output pins on the board using the interface. You can view the analog voltage values read by the A0-A5 ports (on the left side), can view digital input values, and can control the digital output values (as we will see).

4. Connecting the Arduino to the Computer 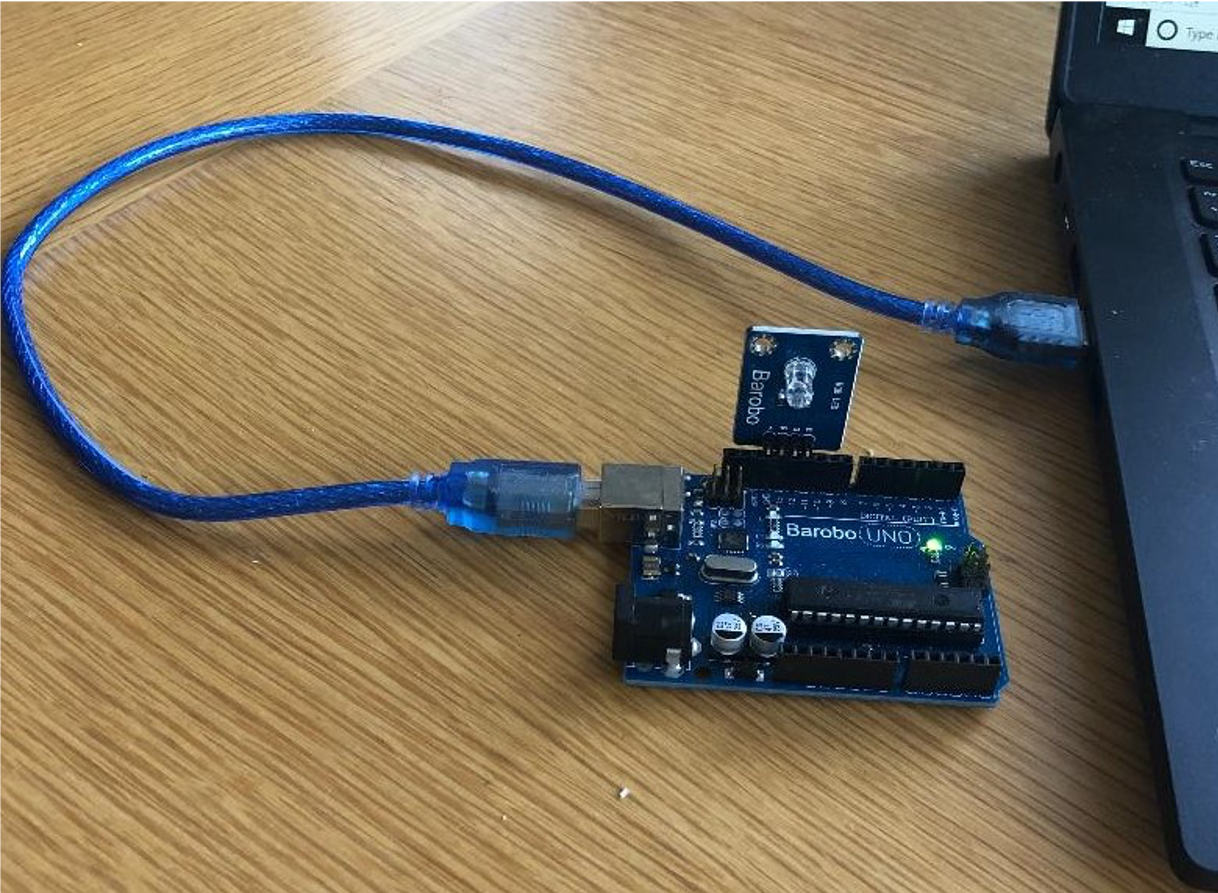 Figure 8: Connecting the Arduino to the Computer via USB cable

Once the Arduino is connected to the computer via the USB cable, you should see a light on the board turn on, indicating it is getting power from the computer (assuming the computer is on).

In order to complete the connection, we need to get the Arduino software (ChDuino for Windows and MacOS machines and Arduino Controller for Chromebooks) to recognize the Arduino board. As usual, the process is slightly different for Windows/MacOS vs. Chromebooks, so we’ll cover each in turn.

(a) Completing the connection for Windows and MacOS machines

If the ChDuino program is not open, you can open it now. Make sure the “USB” checkbox at the top left of the ChDuino interface is checked (and Bluetooth unchecked), and then click the “Scan” button at the top left, and it will scan for a connected Arduino board. Yours should appear in the message area in the middle left, as shown in Figure 9 below, with a red dot next to it. The red dot indicates that the Arduino is physically connected but not yet connected via the software. The COM port where the Arduino is connected may also be listed. (It’s possible to have multiple Arduinos connected to the same computer.) 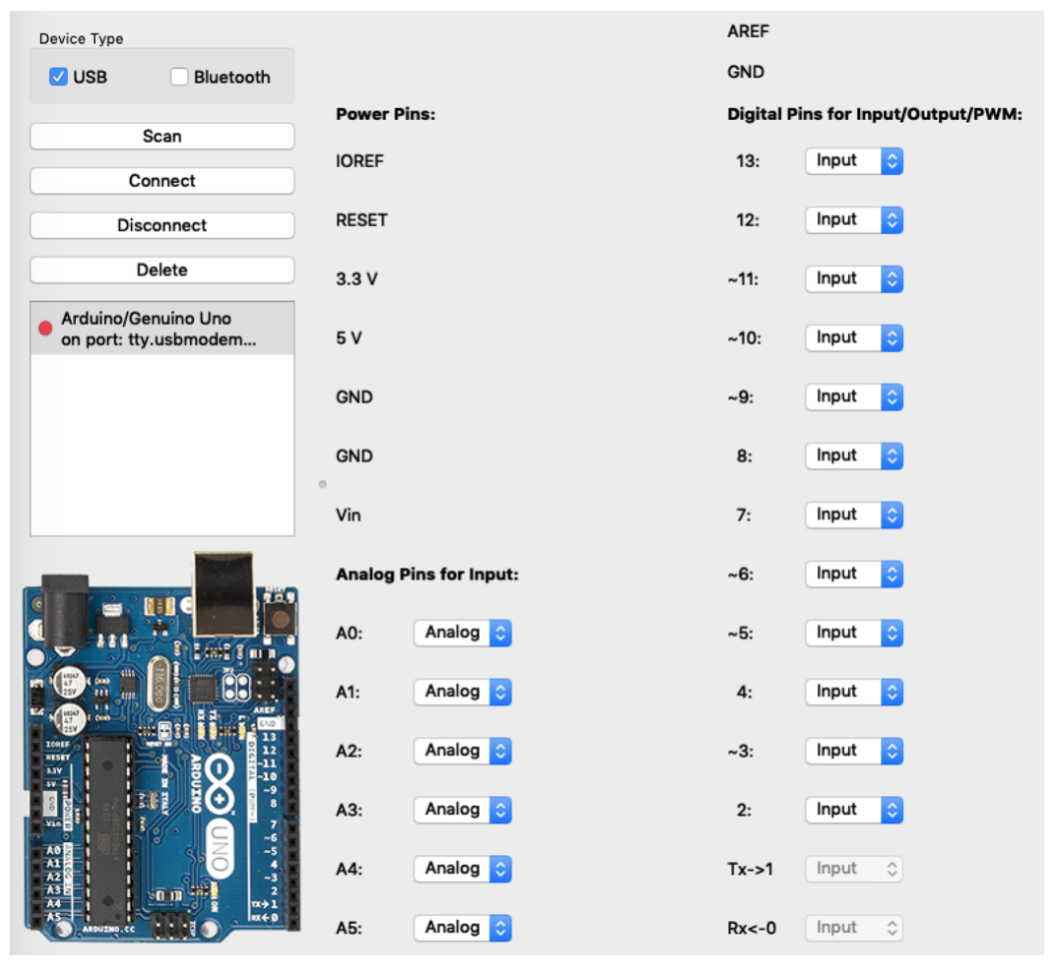 To complete the connection click the “Connect” button at the top left.

Two things may happen at this point. If you are using a new Arduino, or one that hasn't been used in awhile, the red dot will turn to green, but there will also be a message along the lines of “Check connection or update firmware" (Figure 10): If you see this message, see the section below on how to update the firmware.

The second thing that may happen when you click the "Connect" button is that the red dot simply turns to green: 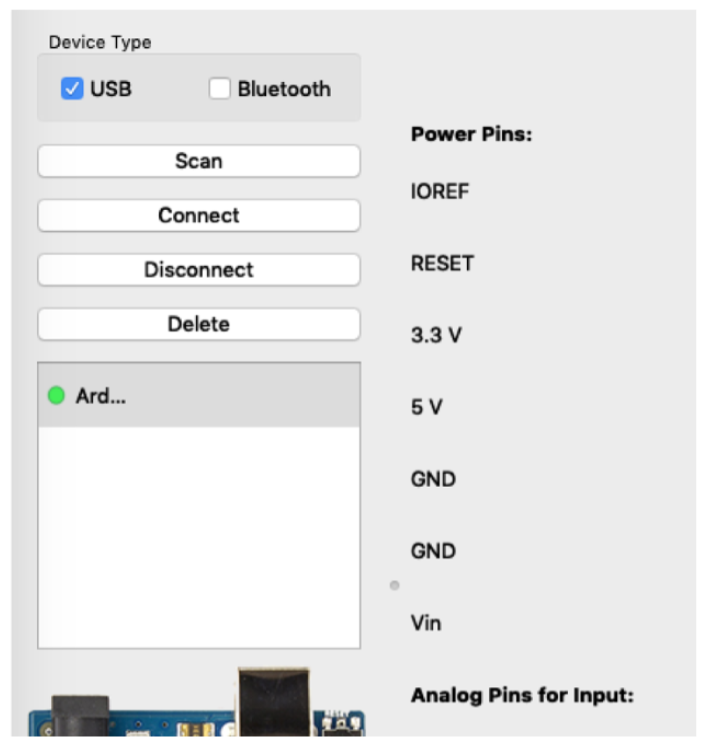 In addition, fluctuating numbers should appear in the Analog pin section of the ChDuino interface, and you should see a blinking light on the Arduino. All this indicates that the Arduino is properly connected and ready for use.

How to Update Firmware: If, when you click the “Connect” button, the red dot turns to green but there’s also a message along the lines of “Check connection or update firmware,” click the message. A small window should open with a button that allows you to update the firmware on the Arduino board (Figure 12):

Firmware is the computer code stored on the Arduino that runs the board. When new features are added, or software bugs fixed, a new version of the firmware must be uploaded and stored in the Arduino board.

Click the "Upload Firmware" button. You will see a progress bar that shows that it is uploading (Figure 13):

When it is finished, a "Done Uploading" message will appear and the Arduino will be ready to go. If ChDuino does not show the Arduino as connected (with the green dot), simply click the "Connect" button again to reconnect.

You can also manually update an Arduino board's firmware by going to ChDuino's Tools menu and selecting "Firmware Uploader." To do this the Arduino board should not already be connected via ChDuino, so if it is, first click the Disconnect button. (Of course, the Arduino must be physically connected to the computer with the USB cable.) When you select the "Firmware Uploader" option in the Tools menu, you will see a popup window something like this (Figure 14): Click "Upload Firmware" and the firmware uploading process will start. (If no Arduino board is listed, first click "Scan.")

For the next step, continue with Section 5 below.

(b) Completing the connection for Chromebooks 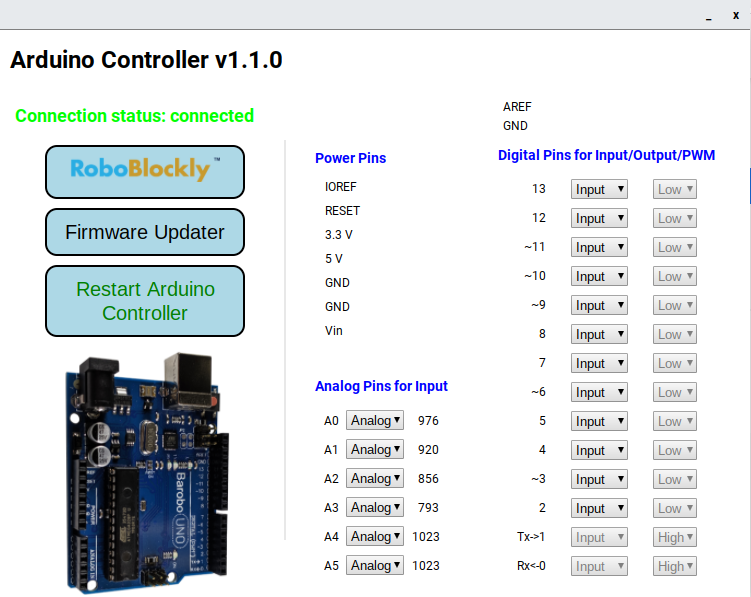 In addition, fluctuating numbers should appear in the Analog pin section of the Arduino Controller window, and you should see some blinking lights on the Arduino. This all indicates that the Arduino is properly connected and ready for use.

You probably have also noticed that there is a “Firmware Updater” button in the Arduino Controller window. Firmware is the computer code stored on the Arduino that runs the board. When new features are added, or software bugs fixed, a new version of the firmware must be uploaded and stored in the Arduino board. At times you may get a message to the effect of “firmware update needed.” If so, click the “Firmware Updater” button. A popup window like that shown in Figure 16 should appear. Click “Start” and wait until the progress bar reaches 100%, then close the Firmware Uploader window. 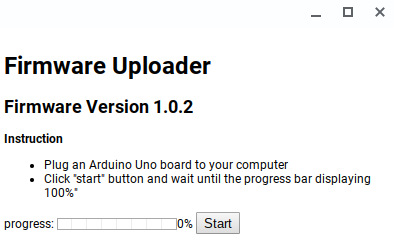 The final step is to send a High signal to the LED to turn it on (or Low to turn it off). The red LED is connected to the Arduino’s digital pin 13. Because we want to output a signal from the Arduino to the LED, we need to set pin 13 to “Output” mode using the pulldown menu next to the pin number in ChDuino or Arduino Controller. For the ChDuino interface, if pin 13 is set to “Input”, it looks like this:

Figure 18: The Output High/Low Options for Pin 13 (ChDuino for Windows/MacOS)

For the Arduino Controller interface, changing pin 13 to Output looks like slightly different:

To output a “turn on” signal to the LED, simply click the “High” radio button for pin 13  in the ChDuino interface or use the pulldown menu for pin 13 in the Arduino Controller interface to select “High.” A 5 volt signal will be sent through pin 13 to the LED, thus turning it on. To turn it off, simply click the “Low” button (ChDuino) or select “Low” (Arduino Controller), which sends a 0 volt signal to the pin and out to the LED.

It’s also possible to get a “dimmer switch” effect using certain of the Arduino’s digital pins. Normally, a digital device is either on (High voltage) or off (Low or 0 voltage). But using a technique known as “pulse width modulation” (PWM), it’s possible for a digital pin on the Arduino to simulate a range of voltage outputs. When an LED is connected to a digital pin set to the PWM mode, the simulated range of voltage outputs allows the brightness of the LED to be varied over the range from Low (off) to High (full on).

If you look closely at the numeric labels for the digital pins on the Arduino board, you will see that some of them have a tilde (squiggly line) in front of the number. This indicates that the pin can be set to PWM mode in addition to Input or Output mode. You can also see the tilde indicators in the ChDuino interface (Windows and MacOS machines), though not in the Arduino Controller interface (Chromebooks). In both ChDuino and Arduino Controller, however, you can see which pins have the PWM option by clicking on the Input/Output menu for that pin. If it’s a PWM pin, then you will see PWM as a third option. For reference, the PWM pins are digital pins 3, 5, 6, 9, 10, and 11.

Figure 20: Setting Pin 11 to PWM Output (ChDuino on the left, Arduino Controller on the right)

So that’s how you connect an Arduino board to a computer and control an LED. If your LED does not turn on and off when you click “High” and “Low” in ChDuino or Arduino Controller, here are some things to check:

8. Explore the “Moon Base SOS” and Other Arduino Learning Activities